It’s that time again, when we look ahead to see what the most popular names of babies will be this year. Everyone does that, right? Here’s a round-up of Dr. Brown’s Baby Names of 2019 – grab your Dr. Brown’s MyBands™ and get ready to write down your favorites!

Before we hop into the New Year’s roll call, let’s take a quick look at what baby names 2018 brought us. Here are a few of the trending names we saw throughout the year, including some that didn’t quite top the list and still remain up for grabs. 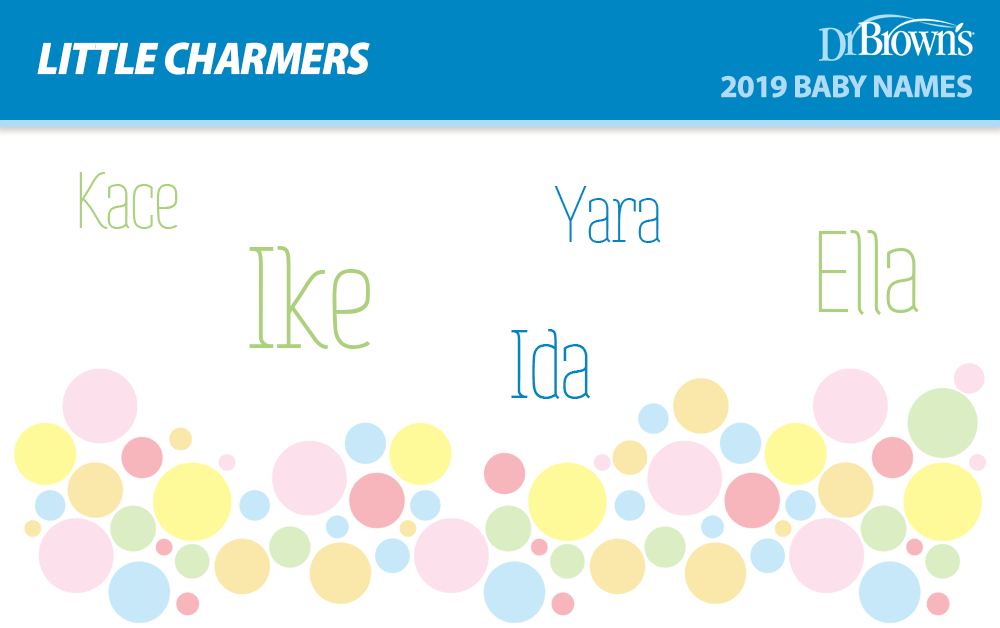 These names are short and sweet, sure to cause a few “awww” noises out of us. Let’s break down where each of these come from:

Kace: From the Gaelic name, Casey, Kace is a shortened form that works well for a boy or girl. It means courageous and vigilant – fitting for your brave little one.

Ike: Of Hebrew origins dating back thousands of years, the name Ike today means laughter, perfect for the smiliest babes. It’s also known for being the nickname of American president, Dwight D. Eisenhower.

Yara: Pronounced, YAH-rah, this name comes from a beautiful Brazilian goddess who had green hair and fair skin. In Arabic origins, it means “small butterfly.” It’s also a stunning alternative to popular spellings of Lara and Mara.

Ida: This multi-language name can be pronounced EYE-dah or EE-dah. In Crete, you will find this to be the name of the mountain where mythical god Zeus was born, making it perfect for the little one who will grow to reach the stars.

Ella: For the more magical, Ella is an adorable name given to our beautiful fairy babies. In German, it means “all” while in modern Hebrew it’s “goddess.” The full version of this name can be Eleanor or Ellen – or you can keep it short and sweet. These time-tested names might have been given to babies long ago but they’re making a come-back for those who don’t forget their history.

Maeve: From the old Irish for Madb or Medb, Maeve means “the cause of great joy” of which we ask, what baby isn’t? This name is great for your own tiny warrior queen.

Sonny: While it showed up back in the 20’s, the name Sonny saw it’s peak in the 1970’s and 80’s in the U.S. Largely associated with the music industry in many forms, it’s a singsong name for your little ball of sunshine, whether that’s a boy or girl.

Lily: Though it hasn’t really ever lost its appeal, Lily started to make a comeback around a decade ago as a more popular girl’s name. Meaning “pure” it’s also the short-form of Lillian or Elizabeth, but we think it’s pretty – pure – on its own.

Ace: While it may be short, the name Ace is packed with positive meaning. Unity, noble, first in luck – just a few examples of the name’s significance. It offers that vintage feel for the modern superstar.

Jimmy: Usually used as the pet name for James, Jimmy is a worthy given name in its own right. It has been around in some form for an untold number of years and its pervasiveness is a clear sign of its lasting power. Are you looking for a name that no one – or at least not many parents – have begun using? Check out these new age names made just for you.

Twyla: A name that rolls of the tongue so wonderfully, Twyla means “woven” or even “woven with double thread.” It’s a bohemian approach for the whimsical and mischievous little one.

Laken: Depending on who you ask, Laken can mean anything from bedsheets to “from the lake.” But the real value in this name is its strength and uniqueness. While more commonly a boy’s name, it’s also been known to be given to girls.

Alita: Special. Chosen one. Winged. No matter where this name comes from, Alita says beautiful intention. There are several variations depending on origin, including Elita.

Cillian: This Gaelic name for a boy tops the popularity lists in Ireland. Meaning “little church,” Cillian is starting to make its way through American hospitals. A more common version is Killian but that just won’t cut it for the new age baby.

Nova: For the stars that burn the brightest or the girls who chase butterflies, Nova is their name. Its Latin for “new” and has a history in Native American culture. Swedes and those in the Netherlands particularly love this name – and so will you!

Why reinvent the wheel when you can refresh an old favorite? These next names offer an updated twist on names we’ve known throughout the centuries.

Adrian: While typically spouted as a boy’s name, Adrian is becoming primed for girl’s all over the U.S. It goes to at least the 12th century – probably further – but your modern take makes it perfect for your little lady.

Deakon: Better known as Deacon, this new take on an old name has seen a recent resurgence in 2018 with the updated use of the ‘k’ instead of the ‘c.’ It’s still a relatively rare name – so snag it up before it takes off.

Tomas: In other areas of the world, this name has persisted for generations, spinning off from the more well-known spelling of Thomas. However you pronounce it, Tomas means “twin” – which might just be the perfect name if you’re expecting a set yourself.

Elly: This newer spin on an old classic – Ella – is playful and cute for any baby girl. It stands for light, something she will do to your world when she is born.

Trader: For a long time, this name existed as a popular surname reaching all the way back to 1370. Recently, though, it’s made the rounds as a given name to little boys in the United States. It’s fun, unique, and yet still distinguished.

Rowen: The more updated Rowen is a beautiful adaption of a name that has been around for centuries.  The original spelling of this name, Rowan, is from the Gaelic word for red-haired – but don’t let color decide if you use this name.

Picking out the name of your baby is a very personal, difficult decision. It will follow them for the rest of their lives and help define who they are – so, no pressure! Which name from the Dr. Brown’s 2019 Baby Name List is your favorite? Share now!